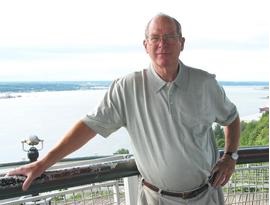 Compaq, once the number one personal computer manufacturer on the planet, pulled a surprise move and hired retired Rear Admiral Don Weatherson, to lead the company into certain vertical markets including the public sector back in 1994. I worked in Don’s organization for a few years and learned my greatest marketing lesson from him, lessons which I have carried on to the Institute for Excellence in Sales. He passed away in June. His recent passing prompted these memories.

Serving as the marketing director for Compaq’s Federal business in the mid-1990’s, my job was to figure out the best way to establish Compaq as the leader in the Public Sector PC and server market, and to help drive sales through our multiple channels. I had a multi-million dollar promotional budget, which with the possible exception of Dell, was the largest marketing budget of any technology provider in the Public Sector. [Just as an aside, I recommend having a job where you manage a huge marketing budget. It’s a lot of fun.]

Every trade show, magazine, and promotional vendor servicing the Federal market made a mandatory stop in Houston to court our team. We were treated to great lunches and dinners. I sometimes refer to 1994 as the “Year of Eating Dangerously.”

In order to ensure that Compaq had the most creative marketing plan, I met frequently with the company’s Advertising, Direct Marketing, and Events teams to put a killer plan in place. Back then, the common term was marketing mix.

The first year my plan was created, I was excited to present it to the Public Sector leadership team led by Don. After all the hard work we put in, I expected a quick meeting that ended with a slap on the back and a hearty “Good job, young man.” Instead, Don’s response was a perplexed “why are you proposing so much advertising?”

“DON” DOESN’T GET IT

In the 1990s, trade print magazines were huge. The major vendors, such as Compaq, spent millions to entice professionals to take a look at their products. It was the most common way to market.

Well, Don, I replied with my best marketing voice; print advertising and related elements such as advertorials and supplements are a great way to get a mass message to our market, the Federal Government. Plus, advertising is a highly leveraged way to get a brand established. Many IT buyers in the Federal Market read these pubs. I probably rattled off two or three other broad facts.

Don replied, “Great, but why are you proposing so much advertising?”

Ugh, Don doesn’t get it. Sure, he’s a retired rear admiral (equivalent to a two-star general) and was hand-selected to run a multi-billion dollar business for the world’s top computer manufacturer, but he just didn’t get it. I needed to teach him and prove that advertising was the best use of our dollars.

Good data drives good marketing, right?  I called our Madison Avenue advertising team leader and asked him to pull together data for me to show to Don to prove that advertising was the best form of marketing for us. I also called all of the periodicals that I advertised with to get data from them on the value of advertising with them. Packages were sent to me overnight with data on why they were good places to advertise.

I scheduled a meeting in New York with the team to pull the data together in a great presentation that would prove without question that our marketing plan was the best possible one for Compaq. We pulled data from Edwin Balmer’s classic The Science of Advertising from 1909, ladies and gentleman. I tried to get David Ogilvy on the phone. We had fun pulling it together and got input all the way from the top guys at our ad agency, an advertising power house called Ammirati and Puris. They also had the Burger King account for a while.  They even assigned one of their graphic designers to prepare the Powerpoint slides for us.

A week later, we reserved the big conference room in Houston to present the data. Two people from our ad agency flew in from New York for the meeting. They arrived the night before and treated me to a great dinner at one of Houston’s top steak houses. I loved my job.

THIS IS GREAT, BUT WHY ARE WE MARKETING THIS WAY

The presentation seemed to go pretty well. Don seemed to be paying attention. When I completed the slide deck, I expected him to say “Ok, great. I got it. March on.” Instead he said, “Nice job, lots of hard work, but you still haven’t told me why we are marketing this way and why advertising should be such a large part of our multi-million dollar budget.”

My first response was, “Are you fricking kidding me?” But then I took a step back and realized what he was asking. I presented him with impressive marketing data but did not answer his question: “Why are we, Compaq Federal, marketing this way? How is it helping us reach our number one goal, which is not to be the biggest brand in the market but to reach our stretch goal of $152 million in new business?”

Don said, “Look, I’m sure the campaign is well thought out and creative. I trust that our media people are getting us the best rates, however your job is to help us achieve the sales goals. I don’t think that spending 80% of your budget on print advertising will move us closer to the $152 million you have signed on to achieve. Corporate Marketing’s job is to build the brand but your job is to accelerate sales.” Are all you marketing professionals still reading this?

Aha. Wow, got it. Biggest lesson I had learned in my career to date. I needed to put an executable marketing plan in place that was going to help make it easier to sell Compaq computers to the Federal Government, not just build awareness or spread the word.

Down the road, this golden power punch inspired me to create the Institute for Excellence in Sales which has helped thousands of business-to-business sales professionals get better at the art and science of professional selling.

WE GOT SMARTER REAL FAST

With our new clarity, we then put some things in place to put together a smarter plan.

It was real roll up your sleeves, do the research and put some models in place type of market planning.

We came back with a smarter, customized plan that was focused on marketing to a few agencies to grow versus trying to win the entire Federal Government, which was not realistic. Our market got suddenly smaller and the marketing strategies to win their business became clearer. Putting together a marketing plan to win sales suddenly got a lot easier.

HE GOT IT. I GOT BETTER. I AM THANKFUL.

It’s a lot easier today to measure marketing performance than it was back then. Print has become less of a marketing tactic for reasons we all know. The Admiral taught me lessons which helped me since the 90s how to frame my approach to sales and marketing.

Because of him, when I became a marketing consultant, my motto was “Marketing that doesn’t bring revenue reward is a huge waste of time and money.”

Don got it. His memory is a blessing that I’m passing on.